We were asked to create a social event live & interactive on Yahoo OMG! that trends.

Since YahooOMG! is all about gossip, we decided to produce celebrity content that is exclusively accessible on the YahooOMG! website and would make users talk and interact.

By using #StripJamie, Twitter users were giving the chance to make Made in Chelsea’s Jamie Laing strip down live on YahooOMG! For every 1,000 tweets sent in to the show, he took off an item of clothing…the audience won!

In order to further promote the show, we created interactive videos, personalised messages from celebrities which were sent to key influencers, and designed content around YahooOMG!’s daily celeb gossip.

The web show trended 2nd Worldwide and 2nd in the UK 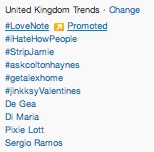 The overall success of the campaign led to the commission of 6-part Twitter-driven game show #SpinTheBottle – currently in production.

Watch the show for yourself: http://uk.omg.yahoo.com/events/strip-jamie/

A MASSIVE thank you to all of our amazing comedy talent, the supporting cast and the equally talented production te… https://t.co/t1h7Z1woHd
- Friday Jun 26 - 4:02pm